Tuesday Poem - from 'Learning the Tango' 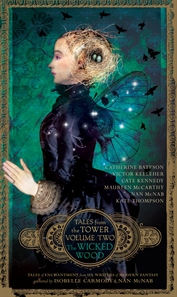 Some years back Isobelle Carmody approached me and asked if I'd like to be involved in a project rewriting fairy stories for an anthology. I was delighted - I've always been fascinated by fairy stories, intrigued by the power of both the original and many revisionings. I love Anne Sexton's Transformations, Angela Carter's The Bloody Chamber, Francesca Lia Block's The Rose and the Beast and many individual poems that use fairy tales as a basis for further explorations.
Just last weekend I attended the book launch of both volumes of Tales from the Tower at Airey's Inlet. It was lovely to be there. The books are beautiful, so here is a taste from my contribution, rewriting 'The Little Mermaid'.
His n’ Hers
She thinks it’s a piece of wedding cake,
matching His ‘n Her bath towels
always fluffy on a heated rail.
Let me tell you about the word lover
- almost rhymes with smother –
take away the l
and it’s all over, red rover.
She’s a pretty little thing
with her cost-a-fortune smile.
The tail’s an obstacle
we agree, but one we can sort
with a large enough fee.
I read her the health warnings:
searing pain with each step
bunions, corns, blisters
and little bloodied footprints,
but she hasn’t dodged
the sea snakes, the
guard toads and deadly coral
to go away fainthearted, tail intact.
Falters only when I demand her voice – my payment.
Everyone’s entitled to a
lullaby or two, even the toads.
How will I talk to him?
Look, miss, there are other ways
you know what I’m saying? You don’t have
to talk all the time. Most men would rather
you didn’t. You want legs. I’ll sell them for a song.
She doesn’t get the joke.
But will I be beautiful?
As you are now but with ten toes to twinkle
and twinkle you’d better – it’s marry or burn.
If he chooses another, you’re dead in the water.
Forgive my frankness. It’s just the way I’m wired.
You say Valentines. I think massacre.
I hand over the potion. She gives up her voice.
Now, who got the best deal, my wise children?
I’d almost feel sorry for her
if she wasn’t so painfully stupid.
Catherine Bateson, 'Learning the Tango', The Wicked Wood, Tales from the Tower Volume Two, gathered by Isobelle Carmody & Nan McNab, Allen & Unwin, 2011.
Read other Tuesday poems here.
Posted by Cattyrox at 9:22 PM

Cattyrox
Catherine Bateson is a poet and writer for young adults and younger readers. She lives in Belgrave with the Accountant, her children (most of the time), her youngest step-daughter (some of the time), two dogs and a wide assortment of tropical fish.